NASA WANTS TO SEND THEIR HELICOPTER TO MARS FOR FLIGHT TESTS 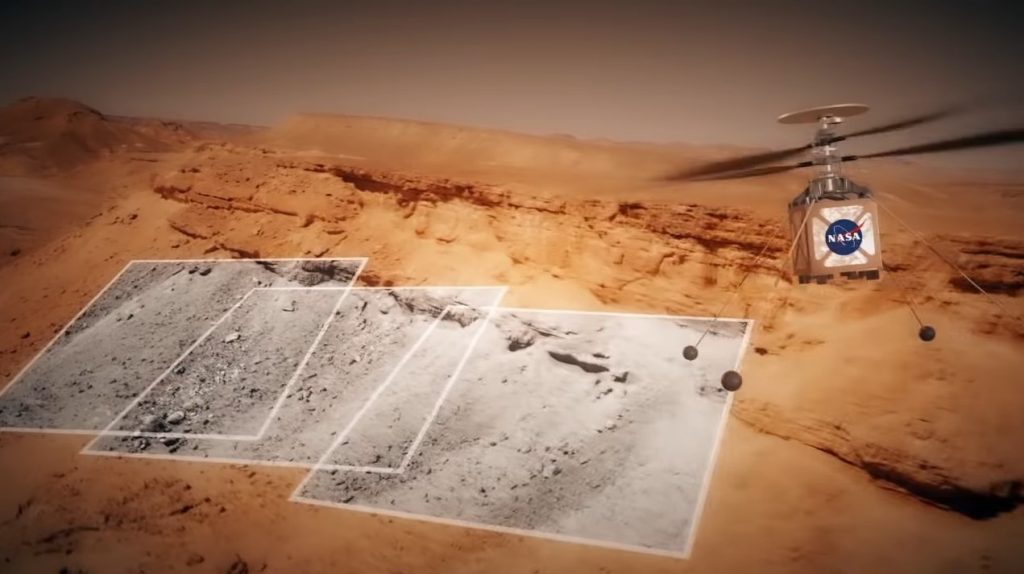 [dropcap]S[/dropcap]ince Mars Remains a Mystery to NASA, They Are Sending Their Helicopter Up to Get a Better Look

NASA has been able to check out the scenes on Mars from the ground of the red planet using rovers and landers and from various of their orbital spacecraft for years. Their next hope is that they can fly a tiny helicopter around the planet’s thin atmosphere at a low altitude. They announced this plan earlier in the month, and the craft will appropriately be called the Mars Helicopter. This craft is going to leave Earth in two years with the Mars 2020 rover that’s set to launch from Florida.

Mars Helicopter Hitching a Ride to Space in 2020

NASA’s hope is that the aircraft like their Mars Helicopter, which is a flying mechanical scout, will provide a new vantage point for scientists to observe Mars. The craft is the very first of its kind and mankind’s first attempt to fly a heavier-than-air-craft, such as a helicopter or an airplane, in any other atmosphere other than Earth’s.

Once the Mars Helicopter makes it up into space, the mission will attempt five different test flights after it is landed with the help of the Mars 2020 rover. Thomas Zurbuchen, Associate Administrator for NASA’s Science Mission Directorate in Washington said that “After the Wright Brothers proved 117 years ago that powered, sustained, and controlled flight was possible here on Earth, another group of American pioneers may prove the same can be done on another world.” 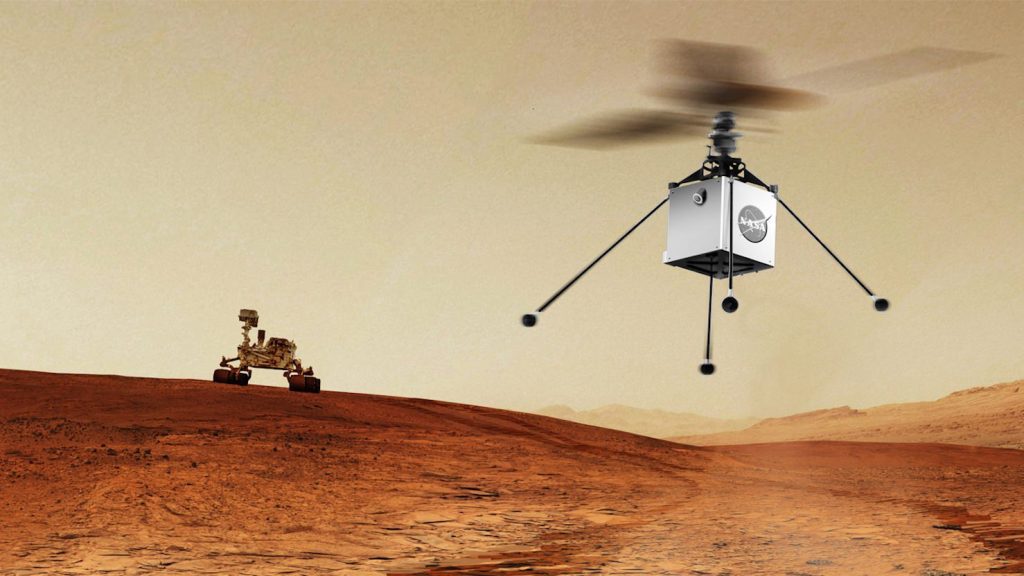 The small statured Mars Helicopter will be small, and we mean tiny, think toy helicopter, not search and rescue copter. The body of the copter will only be around the same size as a softball, or slightly bigger than a borescope you’d use to inspect it with, and will be mated to the rover’s belly pan during flight. Once the mission reaches Mars, the rover will placed the helicopter down and leave.

A Mission to Test it Out

Solar cells on the helicopter will have to charge the small craft’s lithium-ion batteries. Back on Earth, NASA controllers will have quite the tricky task ahead of them as they attempt to control the helicopter during test flights.

In order to get it into the thin atmosphere of Mars, the craft’s two counter-rotating blades will be turning at around 3,000 revolutions per minute, which is more than 10 times faster than the average rpm of a helicopter blade on Earth.

Mimi Aung, the Mars Helicopter project manager at NASA’s Jet Propulsion Laboratory said in a news release that “The altitude record for a helicopter flying here on Earth is about 40,000 feet. The atmosphere of Mars is only 1% that of Earth, so when our helicopter is on the Martian surface, it’s already at the Earth equivalent of 100,000 feet up,” continuing that “to make it fly at that low atmospheric density, we had to scrutinize everything, make it as light as possible while being as strong and as powerful as it can possibly be.”

During the first test flight, NASA hopes to get the helicopter to fly 10 feet into the air and stay there for 30 seconds. NASA will largely be playing it by ear for the next four flights and is hoping to get it to flying further and longer than that after they see how the test one is completed. Should the first test go as well as they hope, they’ll gradually increase flight duration by small increments, and hope to get up to 90 seconds and a few hundred meters of distance.

Since Earth and Mars are many light years away from each other, there is no way to control the mission using any kind of joystick technology that currently exists; NASA will have to complete these missions in realtime. The team has the autonomous capability to receive and interpret commands from the ground, and then use that to fly the mission on its own.

Why is NASA Testing a Helicopter on Mars? 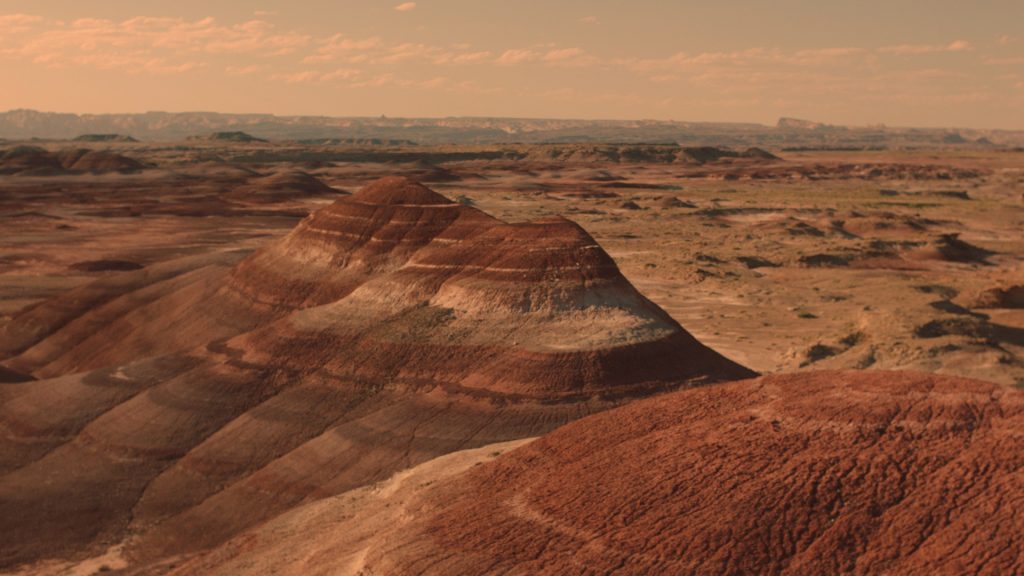 These tests are meant to give NASA a different way of exploring the planet. They hope that being able to see what lies beyond the obstacles more clearly will be crucial for future explorers. Although they already have great views from the ground and orbit, having a close bird’s eye view is something they’re missing from being able to get a full spectrum look at the Red Planet.

While it’s going to be giving the helicopter a lift to Mars, the Mars 2020 rover will be on its own mission and not just going up as a taxi for the other craft. The rover will be looking for signs of life for two years, as well as using tools and measurements to help NASA understand how to safely get humans to the planet. Another exciting part of this mission is that, thanks to microphones on the rover, NASA will actually be able to hear sounds from the surface of Mars for the very first time.

Two other rovers, Opportunity (landed in 2004) and Curiosity (landed in 2012), will carry on their missions to explore Mars, also searching for signs of life, and continuing to send back photos around the planets. Opportunity was only supposed to stay on the planet for a three month long mission, but both rovers have found evidence of signs of active, ancient organic chemistry.

Earlier this month, we talked about NASA launching its probe, InSight, into space. InSight is expected to land near the equator of Mars in November. Amongst other tasks, the NASA InSight craft is set to dig from 10 to 16 feet into the crust of the planet. This will give Scientists a whole new look into the inside of Mars.

There seems to be a lot of interest in Mars over the last few months, and with two new kinds of missions being done that haven’t been done before on the planet, we’re going to learn a lot more about Mars. The key things NASA are looking for are ways to safely land a craft with a human inside on the planet, and they are hoping to find more signs of life on Mars. With these new perspectives, if there’s something to be found up there, they’re sure to find it soon!