INSIGHT TO LAUNCH TO MARS 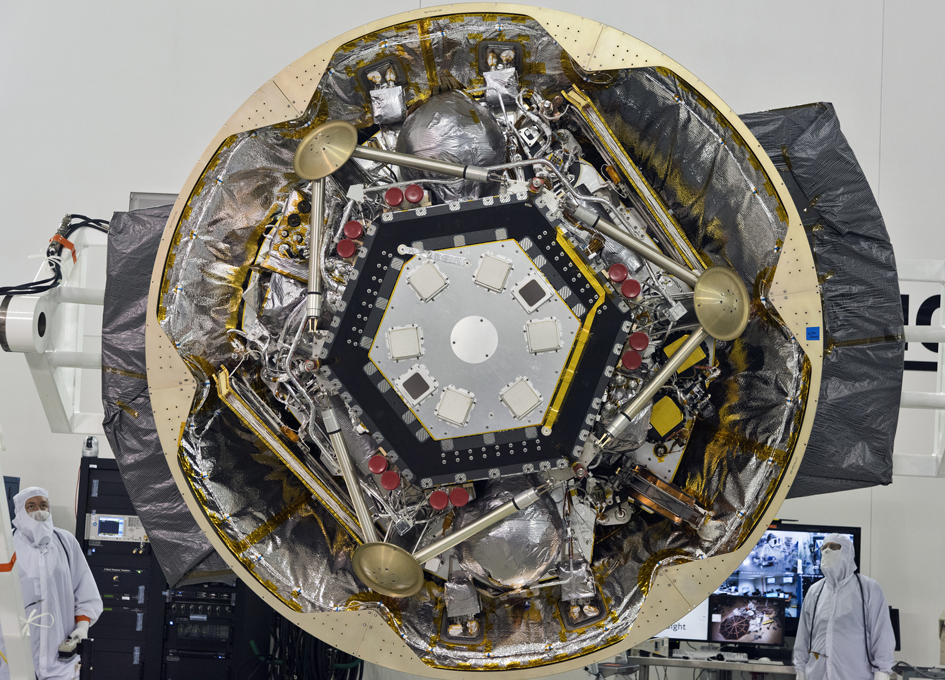 [dropcap]I[/dropcap]n the latest science news, NASA is only weeks away from its next launch window of May 5th through June 8th, 2018 when they plan to launch a new probe called InSight into space with the destination of Mars. This is the first Mars landing since 2012 and, so far, the US is the only country to successfully land on Mars though not without the cooperation of industry and international partners. InSight will be loaded on a 189-foot-tall United Launch Alliance Atlas V Rocket with two other spacecraft as well for the mission. NASA has been studying the surface of Mars with Orbiters, Landers, and Rovers for years but this is the first mission that will breach the surface of the planet to discover its inner workings.

How to get to Mars in 2 Stages

This two-stage United Launch Alliance Atlas V rocket will produce 860,200 pounds of thrust to launch itself free of the Earth’s gravity and will be quite the show for those on the central California coast. The first stage will expend its fuel only two minutes and 36 seconds into the launch when it reaches an altitude of 66 miles and separates from the rocket. The second stage called Centaur will fire 10 seconds later to with its 22,890 pounds of thrust to carry Atlas V to its 115-mile-high parking orbit where it after an hour or so it will fire up for one last burn to set its payload, the InSight, into its final interplanetary trajectory to Mars. No matter when the actual date of the launch is, if they can successfully launch by June, the InSight has an expected and planned date to land on Mars on November 26th, 2018 around Noon.

Inside the InSight Lander 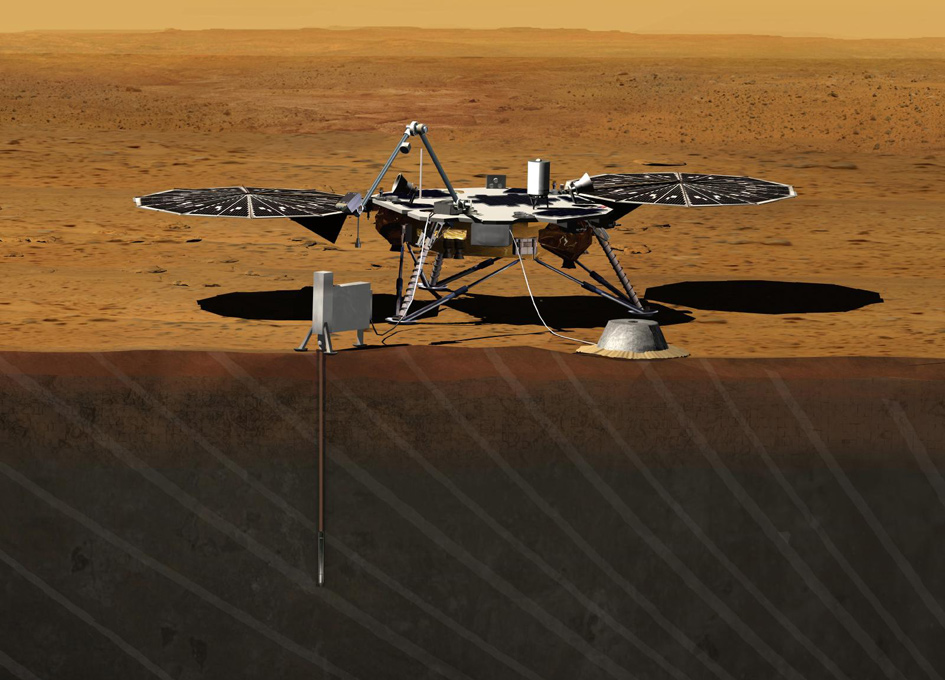 The mission of this craft is to study the deep interior structure of the Planet. Amongst its array of instruments will be a seismometer to detect Marsquakes and a heat probe to detect the interior planet temperature. These instruments in combination with NASA’s currently active orbiters will explain much about Mars’ mantle core and its activity. What NASA hopes to learn is more information on how Mars and all rocky planets are formed and measure the planets vital signs. The information gathered should also apply to how our own Earth and Moon are formed as well. The craft was developed by Lockheed Martin and it has already been delivered to Vandenberg Airforce Base in California where it will take the stage of the first interplanetary space launch from the west coast.

Mars will Teach Us About Earth

The ultimate goal of InSight is to teach us how the Earth was formed. To say the least, Planets are complex objects. Solar systems start with a Solar Nebula, through accretion planets go from a body of uniform dust grains in orbit and through collisions these grains clump together and then, in turn, grow larger over time. Over next few million years, these clumps grow at the rate of centimeters per year into planets. Now all of this evidence can be found on the surface of the planet, but on our own planet, it has been buried over the epochs by plate tectonics and our active Mantle core. Though Mars is a much smaller planet and is far less active with a much thinner crust. Its mantle is much more accessible and we can find out more how that planet formed which in turn will tell us how the Earth was formed.

Landed on January 25th, 2004 it has spent 5000 sols (Martian Days) on Mars or 14 years since. So far it was traveled over 28 miles and is holding the record currently for extraterrestrial travel distance and has sent back over 224,000 images of its trek. It was originally designed to last for only a 90-day tour, but it is still trucking on Mar’s surface and successfully sending data back to earth. Opportunity is now traveling into an area named Perseverance Valley which is a channel which theoretically was carved out by fluid. Mars has some observed channels that have been observed from space since 1971 and this is the first Mars mission to explore these channels up close.

Launched back on November 26, 2011, the Curiosity Rover has been on Mars for over 2000 Martian Days. Curiosity carries the most advanced and largest instruments for scientific studies ever sent to the Mars surface. It is currently still drilling rock and soil samples to analyze and determine the composition and history. Especially any history in relating to the evidence and interaction of water. 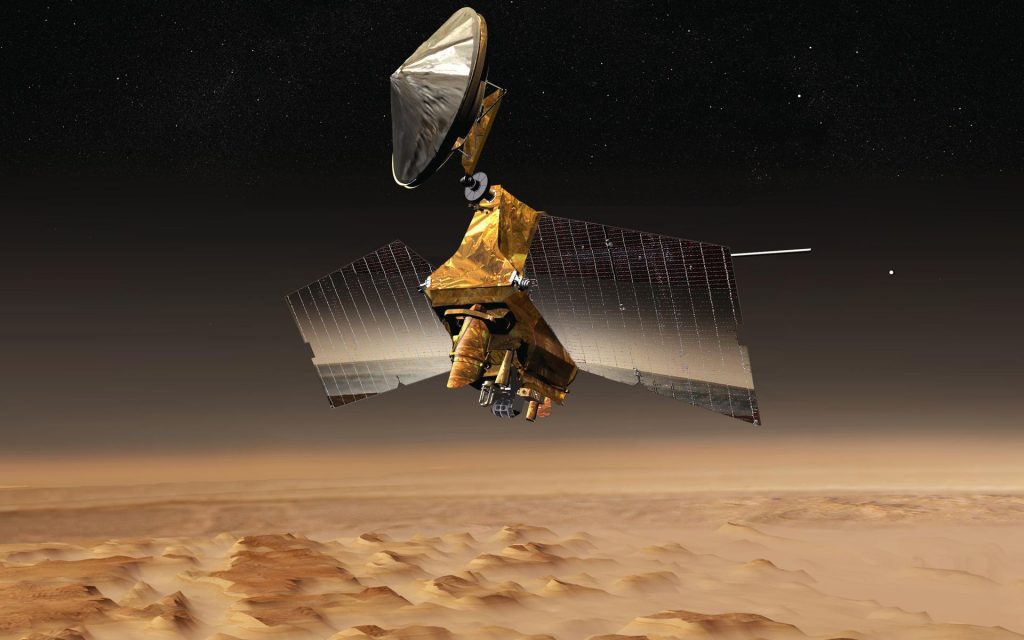 This is a satellite in orbit that houses a powerful camera called HiRISE. With the HiRISE camera, it has revealed thick ice sheets that were exposed in the face of eroding slopes. These deposits extend hundreds of feet deep and are layers of recorded history. This also could be the next possible target for a human launch since Astronauts would just need to dig the water from the ground when they needed it.

Landed on January 4th, 2004 after some geographically compelling discoveries has ended its mission on March 22nd, 2010. Over its 6-year mission, Spirit sent to Earth around 124,000 photographs of the planet’s Mars surface.

Landed on May 25th, 2008 its mission was to find water on Mars. Landing farther north (the Earth equivalent latitude of northern Alaska) than any other previous missions Phoenix started to collect and analyze samples. During is expected 3-month mission the Phoenix probe dug into the ice-rich layer near the surface to determine if the site was ever hospitable to life.

Viking 1 touched down on the Mars surface back on July 20th, 1976 the two landers were sent to conduct three biology experiments do discover any possible signs of life. These experiments discovered chemical activity in the Mars soil that was unexpected at the time but did provide zero evidence of living microorganisms. Viking Lander 1 made its final transmission November 11, 1982. Viking 2 landed on September 3rd, 1976 but shut down 2 years earlier on April 11, 1980 then Viking 1.

Landed on July 4th, 1997 it was designed as a demonstration for a new delivery mechanism for an instrument lander and the first robotic rover called Sojourner to surface the red planet. It has sent back an unprecedented amount of data and outlived its design life setting the stage and bar for later missions.

Be Sure to See Us Go to Mars Again

If you live in the Southern California area be sure to check in and be ready for the launch is it will be quite a spectacle.

“If you live in Southern California and the weather is right, you’ll probably have a better view of the launch than I will. I’ll be stuck in a control room looking at monitors – which is not the best way to enjoy an Atlas 5 on its way to Mars.” -Tom Hoffman, project manager for NASA’s InSight mission.”

It should be visible in the predawn sky as far north as Bakersfield to as far south as Rosarito, Mexico. To find out more science news about the InSight launch in California and the lander itself you can click here InSight Science News and the launch will also have live televised coverage. You can also visit our blog for more Science and Technology News.